What makes MAU the MMA School for you?

We currently have the most MMA students training in SW Florida. Kids, Teens, and Adults are always taught separately.

Jeff Santella is MAU’s head coach and the ONLY local MMA coach certified by the UFC. He is also the only one in SW Florida to have worked for the “Ultimate Fighting Championships”. He was on staff as a World Judge for UFC #13, #15 and #18. He was chosen because of his experience; Jeff Santella was the only Judge who was a PKA Kickboxing Champion as well as a Sport Ju-Jitsu Champion. He is also one of the few who trained BJJ with Royce & Rorion Gracie BEFORE the UFC began.

MAU is the main sponsor for UCF (United Cage Fights, Inc) This is a local state sanctioned MMA league. As of 2016 they have promoted 14 live PRO and Amateur shows.

If you’re on the MAU MMA team. You will have the opportunity to fight in your home town.

Don’t confuse a “Fight Club” with a legitimate Mixed Martial Arts Program.  We Welcome you to the MAU family! 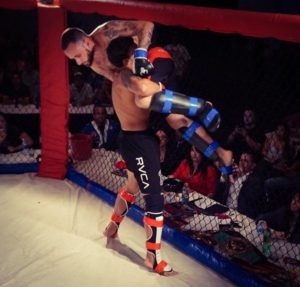 Mixed martial arts (MMA) is a full contact combat sport that allows a wide variety of fighting techniques and skills, from a mixture of martial arts and non-martial arts traditions, to be used in competitions. The rules allow the use of both striking as well as grappling techniques, both while standing and on the ground. Such competitions allow martial artists of different backgrounds to compete.

The history of modern MMA competition can be traced to mixed style contests throughout Europe, Japan and the Pacific Rim during the early 1900s; the Gracie family’s vale tudo martial arts tournaments in Brazil starting in the 1920s; and early mixed martial arts-themed professional wrestling matches (known as Ishu Kakutougi Sen in Japan) hosted by Antonio Inoki in Japan in the 1970s.